Located in Washington DC, Shaw has become one of the most unique, colorful, and interesting neighborhoods in all of the United States. Over time, the neighborhood itself has gone through multiple waves of changes, and these changes are reflected in the incredibly diverse architecture, music, food, drinks, and people that can be found throughout. Today, Shaw has been recognized as one of the most rapidly transforming neighborhoods in the area—one in which people from all over come to enjoy some of the u street bars, restaurants, shops, and music venues that have recently opened their doors.

These new commercial enterprises have been choosing to locate themselves in Shaw for a variety of reasons. The neighborhood itself is absolutely beautiful, it is located right in the center of Washington DC within walking distance of numerous other locations, and furthermore, these new locations have a sort of collective synergy in which they are each able to play off of each other’s successes. As the neighborhood continues to fill with bars, shops, and other cultural icons, individuals who are looking to go on a shopping spree or a much needed bar crawl will find a place in which they will have multiple places to choose from.

After all, with so many choices, why limit yourself to just one? The Shaw Neighborhood is one in which you can spend an entire day or night getting yourself lost—and found—in some of DC’s most niche and original establishments. As more people discover the wonders of this hidden gem, it seems that one question keeps emerging again and again. Why have we waited so long to check it out? 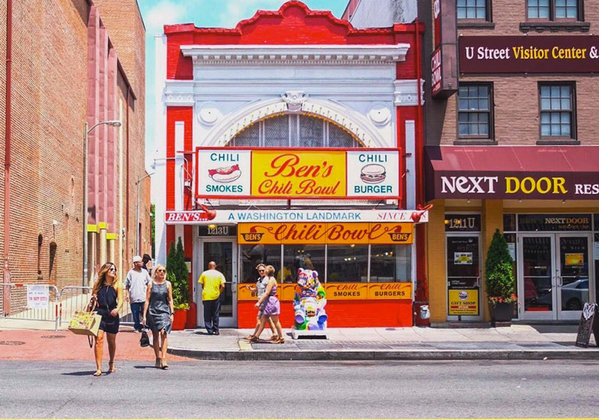 The architecture of DC’s historic Shaw Neighborhood—located right around the heart of U Street—has been praised for its fascinating ability to simultaneously preserve the themes of an older, more aesthetic era while also being able to move into a new century with grace. The neighborhood is full of Victorian housing that demonstrates an obsession with pragmatic detail that characterized the 1800s. Here, you will find a mixture of historically recognized and preserved houses intermixed with new era revivals. Many of the Victorian houses are painted in vibrant colors, and many individuals have deemed the neighborhood the perfect place to watch the sun set over the city.

As the people of Washington DC moved into the 20th Century, a profound interest in industrialism began to spread like wildfire. Factories, warehouses, and other places began to quickly erect themselves throughout the region as the nation’s capital began to experience rapid growth. While only a few of these industrial structures are still functioning as they were originally intended to, the resourceful people of the neighborhood have found ways to preserve their spirit while still putting them to good use. Seamlessly intermixed with the rows of old Victorians, there has been a wave of industrial-revitalization that has overtaken the neighborhood in which many of these old factories and warehouses have been tastefully converted into bars, restaurants, and music venues.

The U Street corridor is the true heart of the neighborhood, and as you continue to explore Shaw, you will come to realize that the spirit of older times has been profoundly intermixed with the new. The combination of Victorian era housing, industrial renovations, and new construction each make this neighborhood one that draws in architecture enthusiasts from all around.

A Center for Art, Music, and Revolutionary Thought

Beyond the architecture that makes Shaw unique, the neighborhood is one that has also been lauded for its historical contributions to art, music, and black intellectualism. During the Harlem Renaissance of the 1920s—a period of revolutionary thought that extended far beyond New York—writers, artists, musicians, and thinkers flocked to Shaw in groves in order to further develop their craft.

During this time, Shaw witnessed the renowned writings of Langston Hughes and others—individuals who sought to express themselves through poetry, free-speech, and political activism. Furthermore, Shaw was also the birthplace to legendary musician Duke Ellington. Ellington was an essential contributor to the big band style of music that characterized much of the 20th Century. The historical impact of Hughes, Ellington, and others can be felt and reflected all throughout the neighborhood, even to this day.

Additionally, Shaw Neighborhood is located adjacent to Pleasant Plains—home of Howard University. Howard University is a top-tier historically black university that currently produces more doctorates than any other University in the nation. The University was a particularly important place of thought during the Civil Rights movements of the 1960s, and these progressive lines of thought can be felt all throughout the area. Furthermore, Shaw’s proximity to one of DC’s larger universities has accelerated its rapid rate of growth and the demand for truly exceptional nightlife.

Rapid Changes in a new Millennium

As a neighborhood, Shaw has certainly had a rich and fulfilling history. Since the Civil War, the neighborhood has been an important staple of regional culture, and it has witnessed a tremendous amount of change, revolution, and development over time. The historical importance of this neighborhood can be felt all throughout—reflected in the diverse mixture of architecture, the unique fusion of different American cultures, and the ongoing advancements in art, music, and theatre that can be found throughout out it.

One thing that the residents of Shaw and their neighbors want to be sure to never forget are the original roots that make this neighborhood so unforgettably unique. There are numerous preserved historical sites throughout the neighborhood, and there are still an ample number of buildings in use that were originally erected in the early 1900s or even the late 1800s. The culture, the people, and the impact of this neighborhood are something that ought to be preserved and remembered forever.

All of this being said, as we move into the third millennium, our world is rapidly changing, and Shaw Neighborhood—the U Street corridor in particular—is not immune to change. Many of these changes have objectively been for the better, and the neighborhood has seen a profound increase in commercial activity, development, investment, and tourist attraction.

The recent development of countless new bars, restaurants, music venues, and theatres up and down U Street and its surrounding areas have made Shaw one of the most important cultural centers in the entire DC area. People come here to enjoy the beautiful sites, tremendous greenery, craft beer, and great food, and there is no question that the neighborhood is poised to continue increasing in value as time goes on.

The 21st Century is indeed one that will be characterized by a great deal of change in our nation’s capital, but this change is something that will only prove to benefit both those who live here and those who come to visit. As Shaw becomes an important centerpiece of such change, it seems the neighborhood will inevitably do what it has always done: keep the spirit of the old while embracing the best of that which is new. As we move into a new era, the neighborhood will undoubtedly continue producing important and lasting culture, attracting visitors from both near and far, and continue making Washington DC a city that is unlike any other.